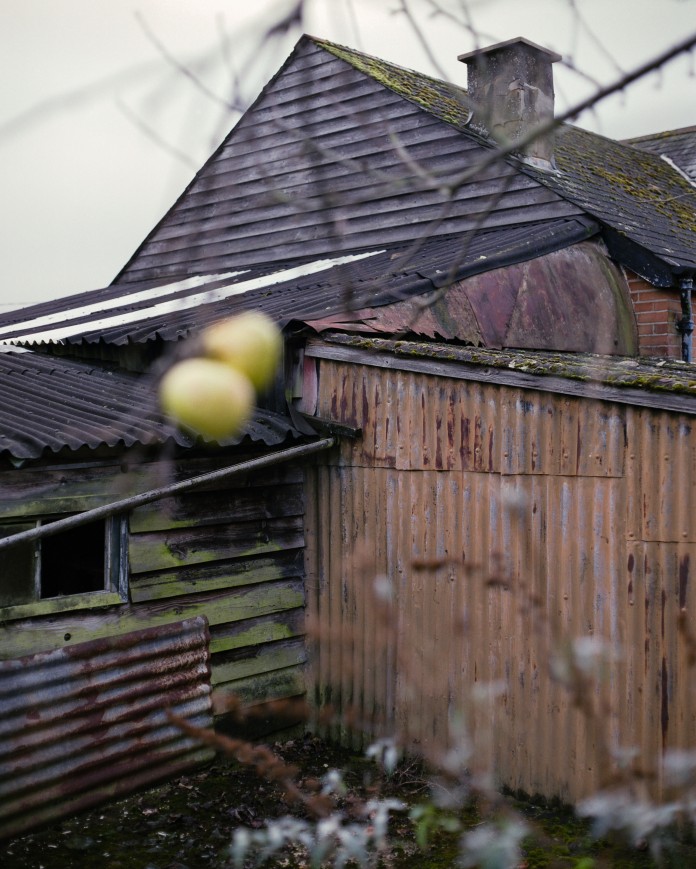 ‘That image reminds me of something. It ignites a small flame that lights my way through the filing system of my mind. It brings me eventually to the hint of a memory, and that memory guides my interpretation of the image, influences my reaction, connects my thoughts and feelings, and threads them together, binding them into a new collection, to be drawn upon the next time something familiar arises.’ – Karen Harvey 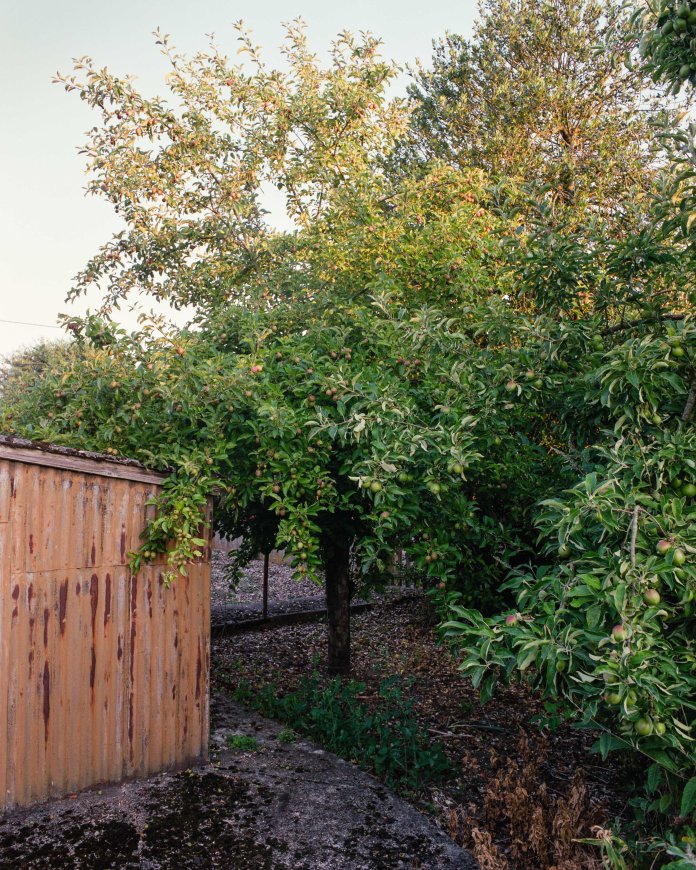 The series is taken from a body of work exploring a derelict house and garden in a rural English community. These pictures document apple trees over a period of two seasons during which time the house was bought, sold and bought again. The new owner is slowly clearing the site and dismantling the outbuildings in preparation for a new home in its place. 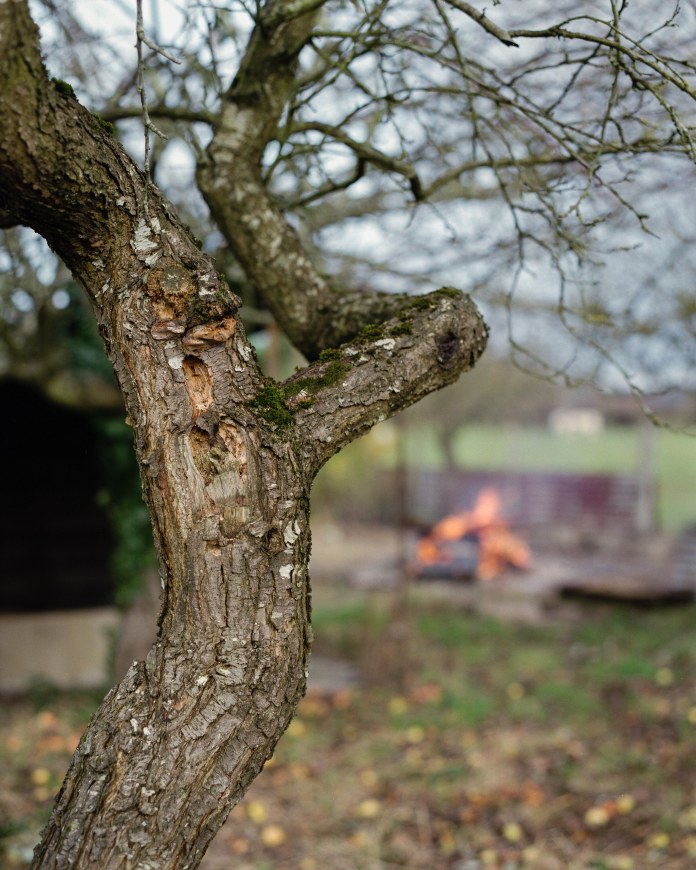 As with any house, small details of previous occupants remain. In this case, the outbuildings sprung up organically over time, encompassing a workshop, poultry coups and pigeon lofts. Evidence of this industry is everywhere, including newspaper cuttings from the 1930’s plastered on a wall dating from when the house was originally built. 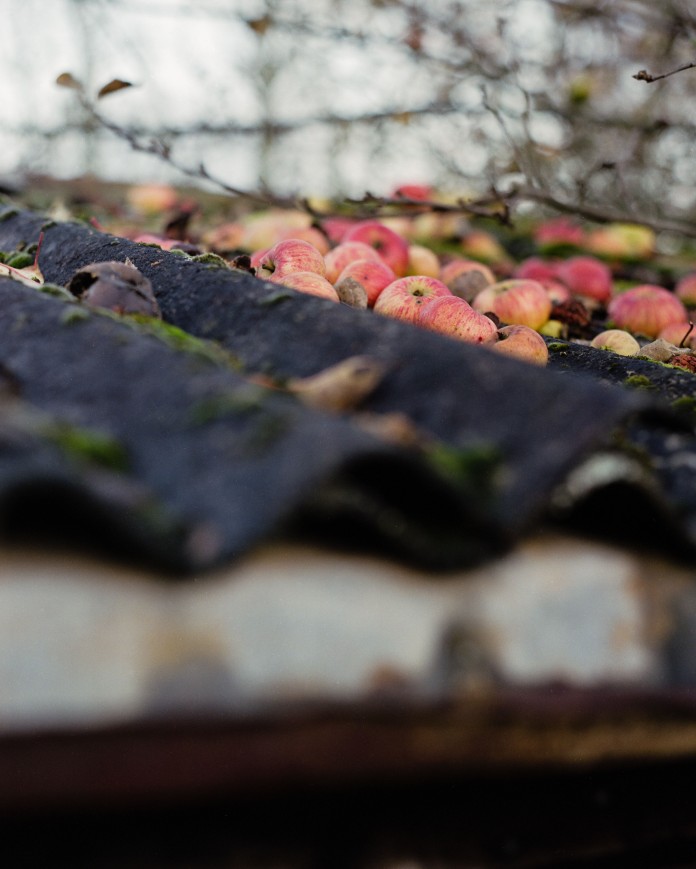 In Christian tradition the apple is a symbol of knowledge, temptation and desire. Recently, it has come to symbolise design, technology and corporate power. As time passes, knowledge accumulates, is gathered, is consumed, or alternatively, it settles in forgotten seams, ready to be re-discovered. As with all things, it deteriorates and is subsumed into something else.

This is everything I ever learnt. 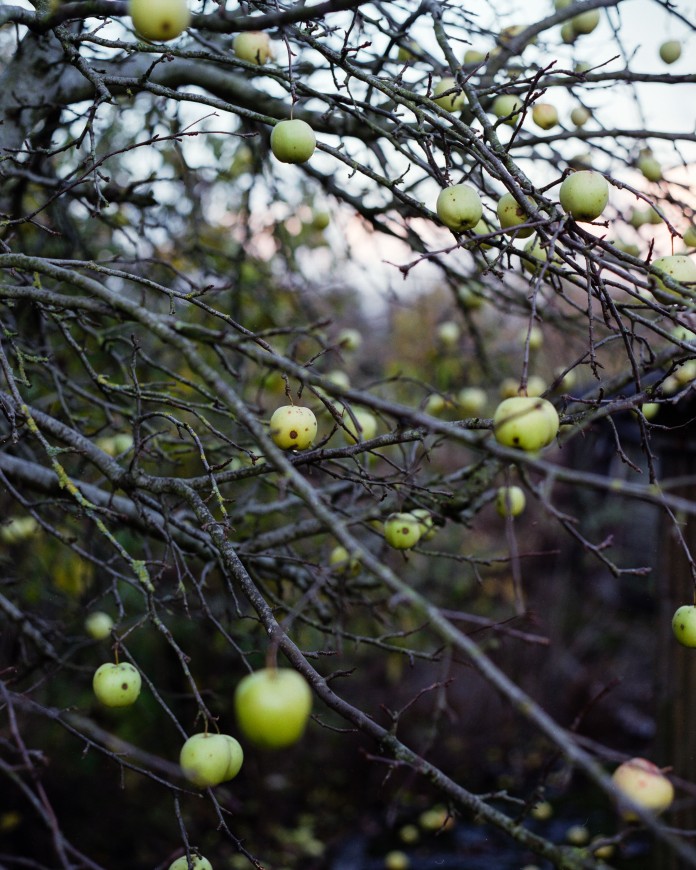 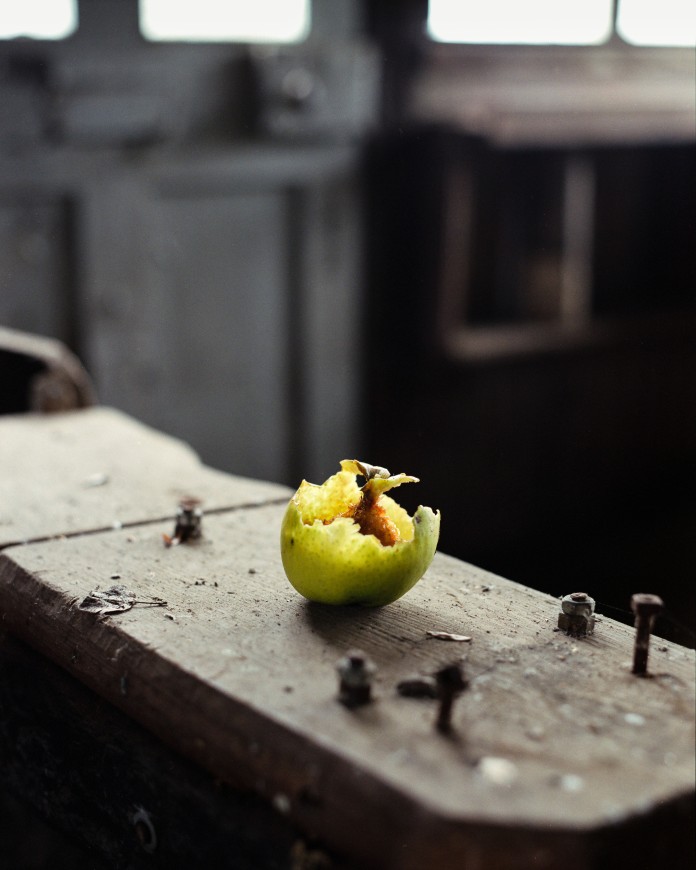 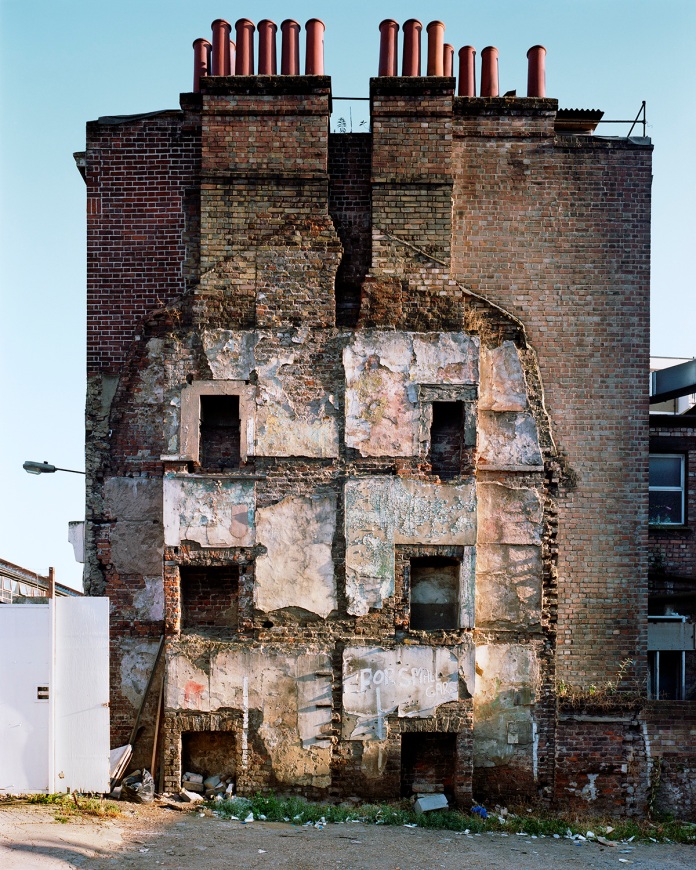 ‘Our real times were spent out of school. I spurned authority, all the boys did. We used the derelict bombed houses as our hideaway places. They were the arenas for our obnoxious behaviour. We would buy a pennyworth of chips for our lunch, ram them into a dry roll and take it into a derelict house, climbing right to the top where we would sit and discuss things, as if we were in some kind of parliament.’ 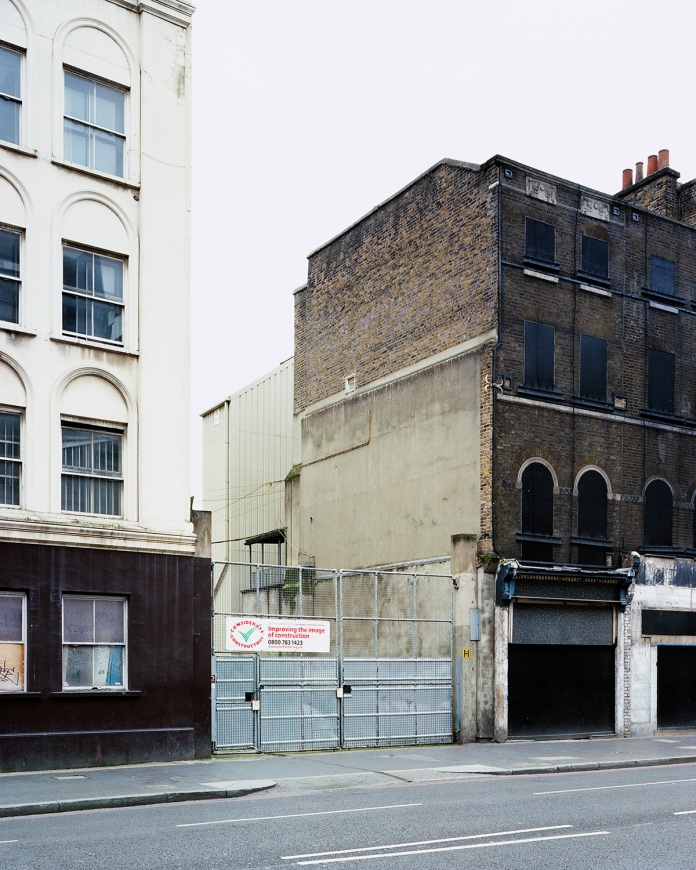 An overall sense of loss pervades the work of brother and sister Beth and Thom Atkinson in their new book, Missing Buildings which, as the name suggests, is a typological study of the bombed-out spaces left in London from the second world war.

This impression is reinforced by the lonely streets, the unpeopled pavements and flat, empty skies. It’s as if the air raid sirens never stopped. As if the living have sought shelter below ground alongside the dead and other archaeological remains. An eerie calm pervades throughout.

As metaphors for memory – both collective and individual – and the cumulative effect of time, these traces of buildings act as a cypher to contemplation; not only about the legacy of war, but also the cycles of social and political change that shape a modern city. Much as weather is photography’s unintended subject, so the changing socio-economic landscape of London permeates Missing Buildings, asking us to look again, and question how far we’ve come.

The outlines of these spectral structures are sometimes hard to see. One might assume that the locating process took weeks of walking and looking. The reality, it seems, is less arduous, and opens a subtle element of ambiguity in the project. Thom describes how most sites are marked on official war record maps, but some aren’t. These ‘unknowables’ are nevertheless taken to be bomb sites, both by the photographers and by passing locals, who engage the pair, curious about the project.

The public recounting of war stories adds a sense of certainty to these unverified facts, and intriguingly, Beth and Thom conspire in this story-telling with photographic ‘evidence’ – enhancing and repeating the fiction. In other words, this is not an exhaustive – or reliable – compendium of sites, but a foray into the urban past, a process of awakening and patient revelation using photography as the key to unlocking a deeper, psychological connection with places imbued with myth. 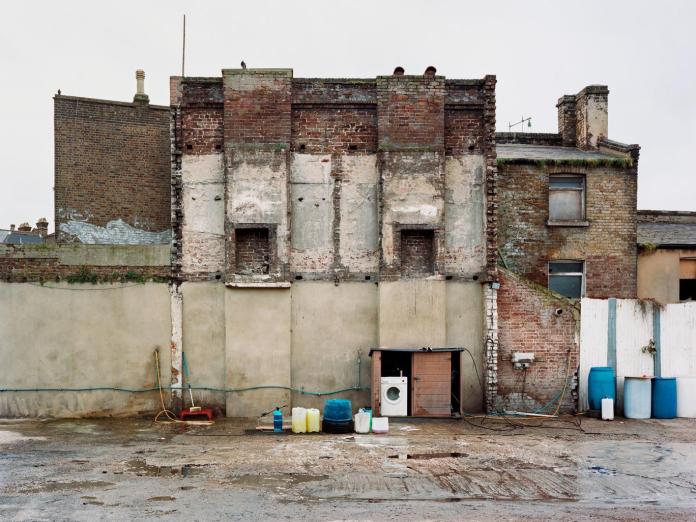 These places are remarkably, disconcertingly familiar. The urban syntax of regeneration, gentrification and disenfranchisement pervade. The side of one building – in graphic coincidence – is rendered ‘transparent’ by talented graffiti artists, showing the private décor of a fictional family, complete with ground floor pub and upstairs cat. An embarassed looking washing machine, surprised by its very public display, peeks apologetically out from a small shed onto a damp carwash courtyard. And a surrealist masterpiece – a giant monochrome rat – eyeballs the lens of Thom and Beth’s camera. Both unblinking. 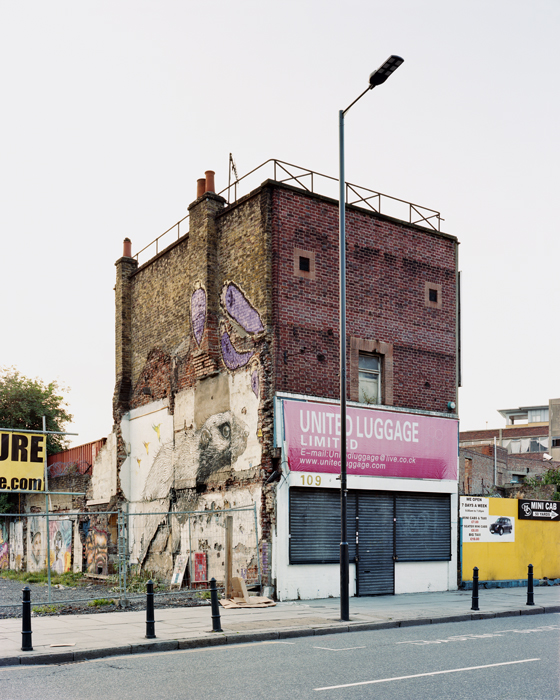 This process of walking and looking unifies the project and connects the photographers to their subject as vulnerable pedestrians, at risk from speeding car or vindictive pigeon. We learn – in the insightful afterword by David Chandler – that their grandfather was an ARP warden, based in Balham during the Blitz, whose job it was to ‘map bomb impacts in the area.’ Beth and Thom continue in this tradition – walking, observing and recording – much as their grandfather had done 75 years earlier. They have created a fitting and timely memorial to their grandfather and to the bomb site victims. 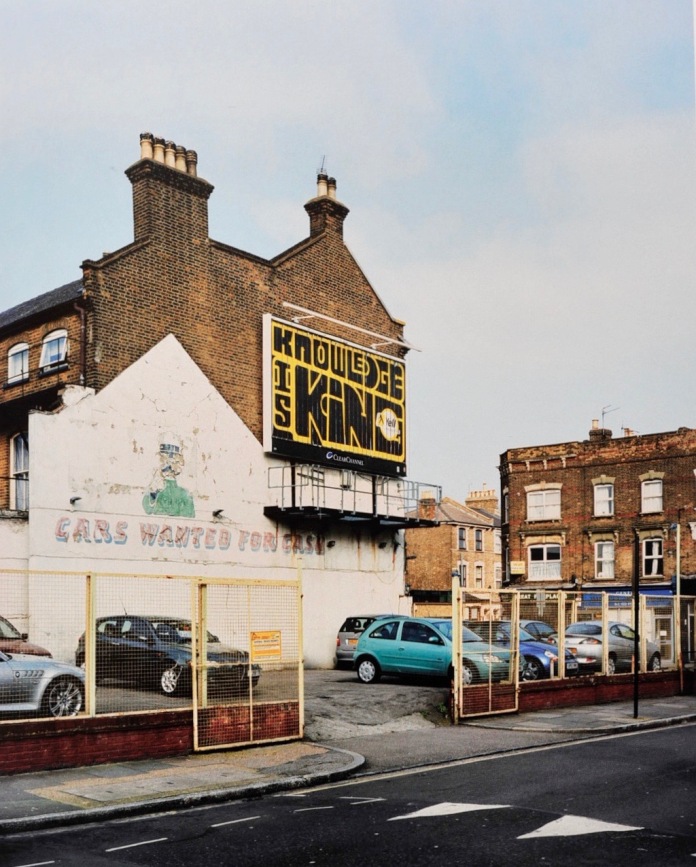 In a picture from Goulton Road, Lower Clapton, a large billboard for a business directory proclaims ‘Knowledge is king.’ Next to it the ghostly, pointing, pock-marked apparition of what appears to be Lord Kitchener hovers above a sign which says ‘Cars wanted for cash.’ The memories of war, if we dare to look carefully, are everywhere. 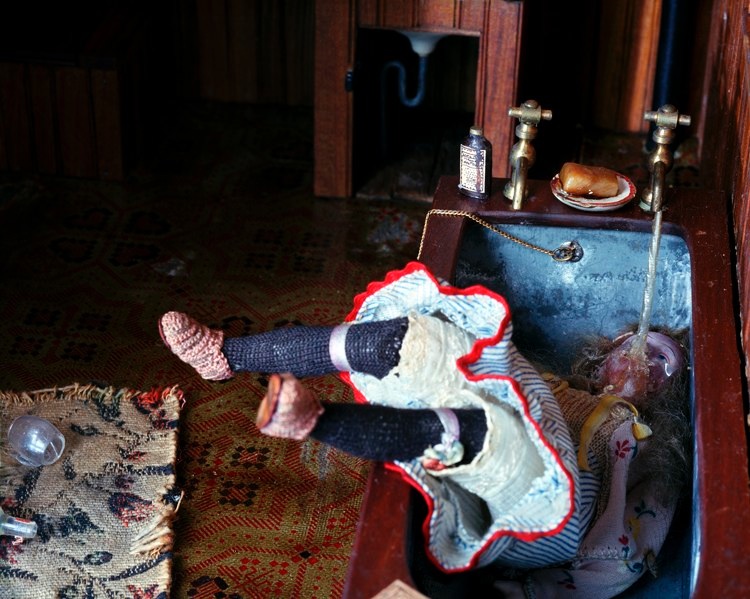 Art and science mix in this boldly curated take on multi-layered forms of evidence.

What is interesting about the Forensics: The Anatomy of Crime exhibition at the Wellcome Collection is the interweaving of science and art, allowing connections and highlighting differences, between the intentions of the artist and evidence gathered from crime scenes. In both cases there is room for dialogue between the viewer and the object. However, evidence gathered by crime scene examiners is in some sense mute until it is given meaning and context in a court of law. Visual artists, in comparison, generate their own sense of context and create an internal dialogue with the work before it is placed in the public realm of the exhibition.

This exhibition of material inspired by and derived from the investigation of crime, creates a tension whereby the artist appears to be substantiated and re-enforced by a proximity to the tools of science and evidence gathering. Corinne May Botz’s photographs entitled ‘Nutshell Studies’ offer a satisfying and successful embodiment of this relationship. They are shrunken recreations of actual murder scenes used by forensic trainers to teach new officers ways of interpreting crime. They are also powerfully subversive in their illustration of an innocent object twisted in form and function, which seems to mirror in some ways an innocent object manipulated, in the assailant’s hands for example, to become a lethal object. 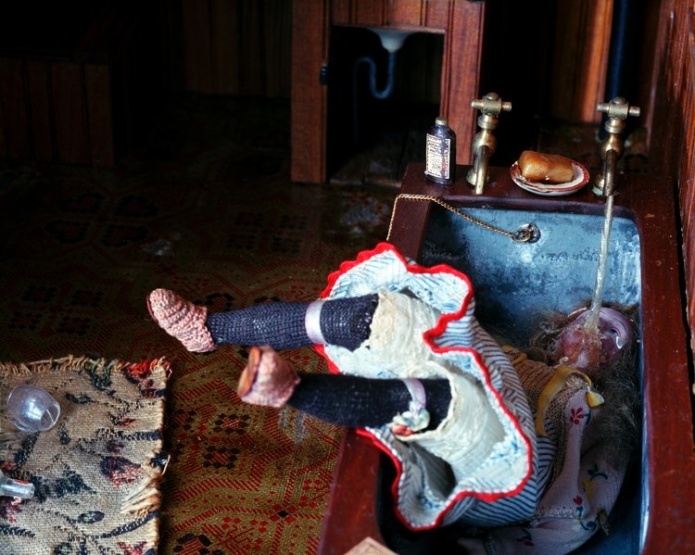 Angela Strassheim’s ‘Evidence’ monochrome photograph, re-appropriates forensic methodology for aesthetic effect. The ex-Police Photographer visits historic sites of violent murder – homes now occupied by new and unwitting owners – and searches for latent evidence still lingering on the walls and around door-frames. The resulting image records the ghostly glow produced by a chemical called ‘Luminol’ as it reacts with traces of contaminant present in the room. The presumption is that this is a reaction with the haemoglobin in blood, but in this context, the finer points of interpretation are masked and diminished by the picture’s ambiguity. Appearing to show evidence that cannot be substantiated, this picture shows the power of the photograph on the one hand – in its ability to render the invisible visible – but also the fragility of the image as a depiction of the empirical truth. 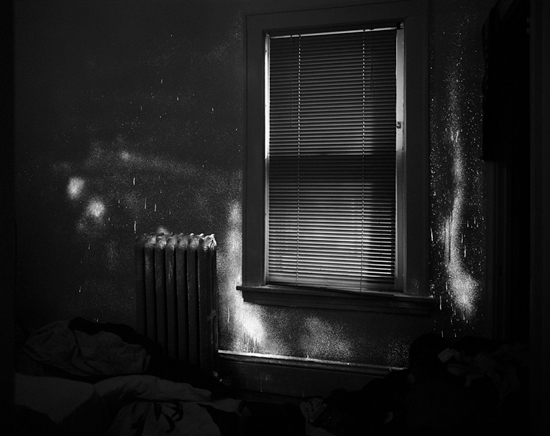 In a reverential ode-to-the-dead, natural processes of decay are represented in Sally Mann’s enigmatic, faceless corpse at the Tennesee Anthropological Centre, aka ‘The Body Farm’. Equally enthralling are acutely observed and luxuriously rendered illustrations from the 13th century – apparently in the Buddhist tradition – showing the nine stages human body decomposition – from pre-death portrait through to tumulus – an innocent looking grassy mound. 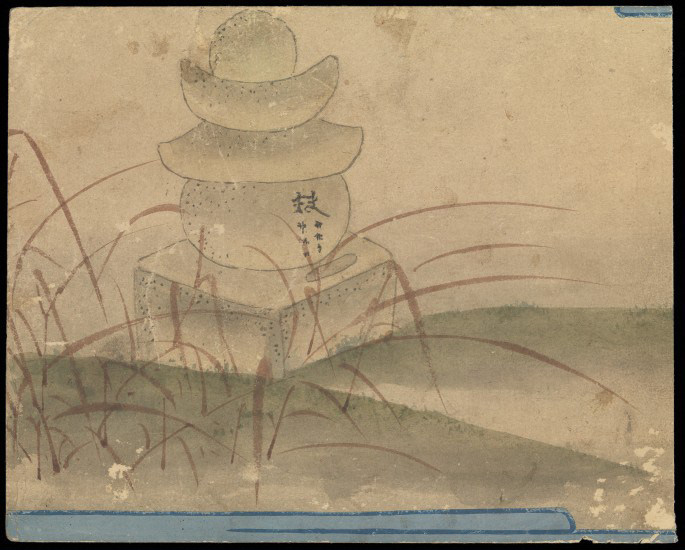 Kusozu: the death of a noble lady and the decay of her body.
Final painting in a series of 9 watercolour paintings.
The final image is of a memorial structure upon which her Buddhist death-name is inscribed in Sanskrit.
Watercolour

Nostalgia for the light, Patricio Guzman’s 2010 film, presents family members searching for their lost relatives in the arid Atacama Desert in Argentina. These women are shown searching for minute fragments of their husbands and brothers, who were arrested as political prisoners under the Pinochet regime and made to ‘disappear.’ Fearing their acts were about to be unearthed, the perpetrators exhumed the mass graves and scattered the remaining body parts, but shards of human bone lie visible still, and relatives identify and collect them, in the hope that these small acts of physical recovery will lead to lasting emotional ones. The unresolved nature of this case and its open ended narrative draw attention to and reinforce the difficulties of identification found elsewhere in the exhibition. 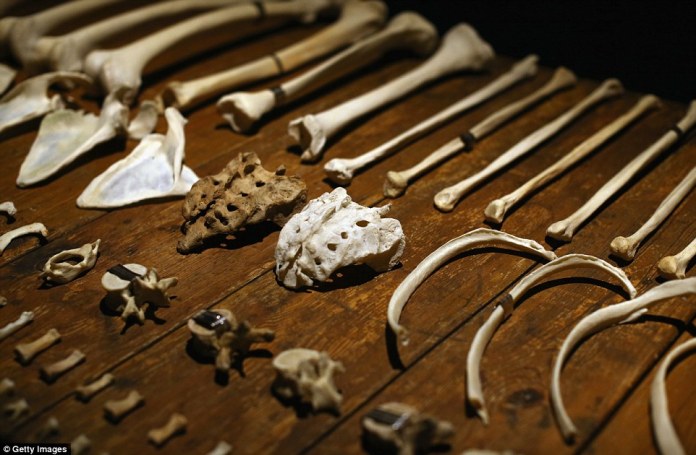 Similarly, the care taken to present the bones in Jenny Holzer’s Lustmord (above) deliberately undermine the violence and careless demise of these victims of sexual crime. The silver tags on finger bones which once wore adornments more comfortably, are etched with ‘unsettling perspectives on sexual violence from perpetrators, victims and observers’. The instillation is protected behind an alarmed barrier, affording the victims more protection in death than they ever had in life. In an adherence of the term ‘forensic’ – meaning ‘of the forum’ – these inscribed ‘voices’ are made mute by their position within a very specific space and time. 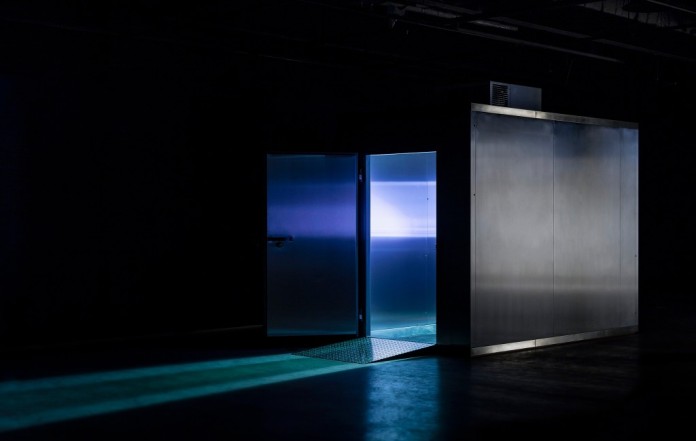 The showpiece of the exhibition, however, is the instillation by artist Sejla Kameric, located in the ‘Search’ section. Inside this solid silver box – a working refrigeration unit normally used in temporary morgues – a projector flashes images of evidence collected in the process of identifying recovered human remains, or Disaster Victim Identification (DVI) in Police jargon. Walking into the unit is a humbling experience. The cold air and drone of the generator are an unsettling distraction, but add a sense of brutal authenticity to the stark representation of hard facts.

This giant industrial cooler embodies the act of scene and evidence preservation in order, as a moral stance it seems, for future generations to find solutions to old problems. The refrigeration process keeps fresh those ugly things, which require revisiting and re-examining, after and beyond eyes tired and jaded.